Characters In Order of AppearanceEdit

Add a photo to this gallery 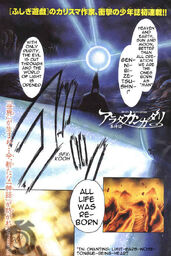 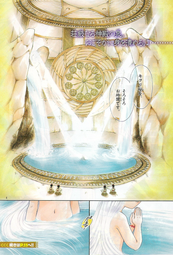 Add a photo to this gallery

It begins with reciting the words that is used in the ceremony,"We are man, born of Heaven and Earth, Moon and Sun, and everything under them. Eyes, Ears, Nose, Tongue, Body, Mind... Purity will Pierce evil and open up the world of Darkness. All Life will be Reborn and Invigorated".

Kikuri was first introduce who is bathing and what appears to be praying, she informs the Twelve Shinshou of the new "Princess" to have been found and will now end her 60 reign as Princess. The Twelve Shinshou are shown in the silhouettes except Kannagi's face.

Arata were first shown being chased down by his grandmother Makari, refusal to so as she says why he runs away, Makari attempts to get him back to their home or at least intimidate him by using Amatsuriki, which sent him flying and landing in a spring which the ancient law stated men are forbidden to enter. He lands in there with a bunch of naked women, among them his childhood friend and attendant Kotoha. Arata tries to clear up the misunderstanding, but they immediately attack him yelling Makari while she is praying.

Arata and Kotoha hide behind something, while watching Makari getting threaten by one of the imperial courts guards, as there are preparing for the ceremony they want assurance of a woman of Himezoku to become princess. Back at Arata and his grandmothers home, they discuss the current situation and we learn of the role of the princess and Arata is told that on his birth certification he was registered as a girl, she states if she did not do that then Arata would've been executed as a child, to buy more time to search for a girl of the Himezoku. Makari wants to keep her blood line safe and was told to pass on the Goshinta a sword said to be a sleeping Hayagami, Arata picks up the sword and pretends to feel a presence then confesses he was joking and begins to play with it.

The stress begins to take its tole on Makari and she starts to feel a little bit of pain, Arata feel tired wishing he can go to a faraway land. Arata begin look at a family walking pass by and start having flashback as a little child asking Makari for her to carry him. Makari accept and tell him one day even if she is gone, Arata must have a full life as a adult. After reflecting on is past, Arata decides to dress as a woman enter the capital and take the ceremony to become Himeou. At night, the Twelve Shinshou were discussing the upcoming princess and remind Kannagi with "time nears. It's all up to you, Kannagi".

Arata and Kotoha travel to the capital were the ceremony and coronation will be held. Kotoha give Arata a charm that Kikuri gave her called the Michihi-no-Tama. Arata constantly gaze at the Michihi-no-Tama that Kotoha give him and tell Kotoha that she must bring Makari far away where the court people cannot find her if they find out that Arata is a male.

Arata is brought to a room which is divide by 13 parts, the area of the Himeou and 12 parts that stretch away from her where the Twelve Shinshou covered in shadows, where the Shinshou are standing. Kikuri greets Arata kindly and prepares him for the coronation, she recites the words which are used at the beginning of the chapter, all the water beneath them rises up and becomes fire.

Kannagi sprints up to Kikuri and assassinate her by slashing her chest with his Hayagami, she in self-defense pushes him back with her Amatsuriki but is far to weak to do any proper damage to him, He then attacks Arata being a wittiness and discovers Arata is a boy and Kannagi later uses this to his advantage.

Arata escapes when he is pushed into the water bellow, Kannagi estimates his movements and goes to apprehend him, and tells the people of the capital that "The Ritual could not be preformed! The princess has been murder! By Arata who disguised himself!" Kannagi then order the soldiers to capture Arata and execute him. Kotoha start searching for Arata.

When Arata resurfaces, He runs away into the Kando Forest seeking refuge in a tree as he is been "eaten" by the forest and was sent to another world...

Retrieved from "https://aratakangatari.fandom.com/wiki/Chapter_1?oldid=6992"
Community content is available under CC-BY-SA unless otherwise noted.