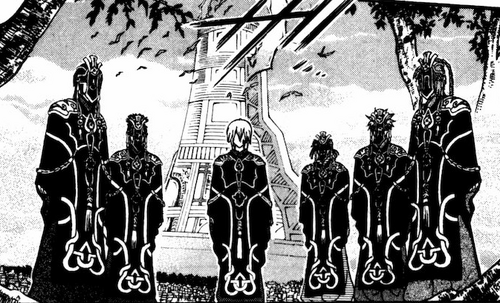 The Six Shinshou (aka Six Shou 六ノ鞘, Roku no Shou) are the strongest and most mysterious of the Twelve Shinshou. All of them wear ceremonial robes and masks (except have their own symbols on them) to keep their identities secret. All information of these members was removed from records in Himeou's court to prevent others from gaining knowledge on their abilities and identities. Therefore the other Shinshou members are weary of these members who they deem creepy and strange.

Shimu is the designated leader of the Six Shinshou. Five out of six members' ambitions are to return back to their original world: Earth; so that they can judge all humans on that world regarding to their hatred from the past. With few of the members' identity and backstory revealed, it may confirmed that all six had lost their physical senses such as hearing or seeing.

Retrieved from "https://aratakangatari.fandom.com/wiki/Six_Shinshou?oldid=8970"
Community content is available under CC-BY-SA unless otherwise noted.